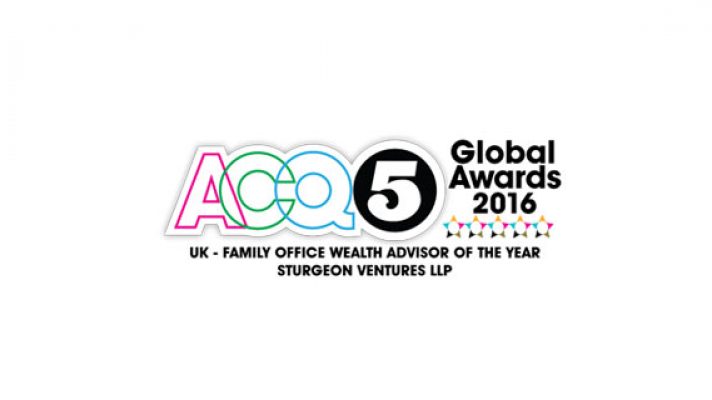 The 11th Annual ACQ5 Global Awards 2016, have for the 3rd year running awarded Sturgeon Ventures as the Best Regulatory Hosting firm of the year alongside:

For further information on the awards:
http://awards.acq5.com/

Sturgeon Ventures are the most established Regulatory Incubator,a trusted partner and venture catalyst. Providing nurturing and bespoke solutions, also known as a Regulatory Umbrella, a Regulatory Hosting or a Regulatory Ecosystem.
Sturgeon Ventures, with offices in London, has incubated people and firms since 1999 and has been a family office wealth advisor since 1998 .  We have been nominated and won many awards including most recently the HedgeWeek Awards Winner 2016 for Best Global Consultant in Business Strategy, HFM Awards 2015 Highest Commendation as the Best Overall Advisory Firm, Acquisition International Magazine’s Finance Awards 2015 Best Family Office Wealth Adviser 2015 – UK and the Award for Innovation in Start-up Incubation, Finance Awards Most Trusted FCA Regulatory Incubator 2104, ACQ MAGAZINE Business Incubator of the year 2104 and Venture Capitalist of the Year at the 2014 M&A Awards.
Sturgeon Ventures contributes to industry publications such as Acquisition International and The Corporate Financier.