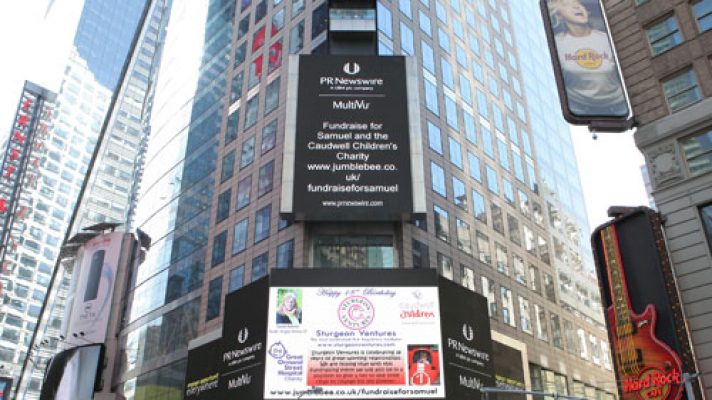 The Auction for Samuel appeared on Times Square from 14-17 April 2016 on Main Board in Times Square in New York as an achievement.

Becky Neill, who is one of our valued consultants at Sturgeon Ventures has a son Samuel who needs help as a Key to Change his life. Seven year old Samuel was born 11 weeks prematurely (due to an infection). As a result of this he suffered a small abrasion on the brain which resulted in Cerebral Palsy. In a nutshell, his muscles are too tight in his legs, causing him to walk on tip toes; he also has little core strength so poor stamina, tasks that other children take for granted he has to work really hard on. The proposed operation offered by GOSH in June 2016 will reduce the tightness (spasticity) in Samuel’s legs, as the surgeon will shred the nerves around the spine that are telling his muscles to tighten. Although Samuel is able to walk, etc. the concern is that unless he has the operation his muscles get tighter and tighter as he gets taller and his mobility will decrease.
The fund is also to help with the physio costs before and after the operation as the stronger her is, the quicker and better the recovery. The cost of the Operation and Physio is £50,000 ($80,000). If we are fortunate enough to raise anything higher than that, the surplus would go to the Cauldwell Children, Changing Children’s lives, who have given us a cell of theirs as a charity to raise this funding as Host. The operation is called Selective Dorsal Rhizotomy and involves a 3 week stay in Great Ormond Street Hospital with a very intense follow up physio for more than a year. With a humble heart we ask, if you would donate an Auction prize and in return we will give you appropriate branding on the page.
Top prizes include: A Tiffany Key, a ticket to The Milken Institute Conference in LA in April 2017 (usually by invitation only), a Who’s Who in Finance and Politics Around the World and an amazing donation by The Milken Foundation.  Also included, a bottle of Chateaux Margaux and amazing experiences. The Auction will close at 8:30pm London time on April 28, 2016. People can start to bid from mid-March. The auction will be hosted by www.jumblebee.co.uk/fundraiseforsamuel.
Please e-mail events@sturgeonventures.com with any donations or suggestions or if you feel you want to give now to help with the pre-physio, please go onto this link. Thank you so much for any donation large or small.
To read the full article, visit the link below.
PR NewsWire – Samuel Neill Fundraiser